Table of Contents
1
Quad vs. ATV
Quad meaning
ATV meaning
UTV meaning
2
Pros and cons of ATV & UTV
ATV vs. UTV : Which is safer
Quad vs. ATV vs. Four wheeler

All the Quads falls under the category of ATV, but all the ATVs are not Quads. That’s how you can refer to these two terms in a simple sentence. ATVs are better than quads in terms of off-road activities. Except for Quad, jeeps and tanks are such vehicles that fall under the term of ATVs.

Let’s distinguish the differences between Quad and ATV by creating a table.

Quad means a small motorbike or cycle that contains four large wheels, which are used for recreational purposes on off-roads. These vehicles are mainly used in private areas to carry goods from one place to another. However, you have a road license to ride the Quad on the road, you can do so.

There are typically two types of Quads depending on the number of seats it has. In one type, there is only one seat behind the driver’s one and in the second type, there is one seat beside the driver’s other two seats behind these front seats. Quads are capable of carrying passengers as well, but it needs to have enough seats, green light from the manufacturer and the on-road driving license as well. 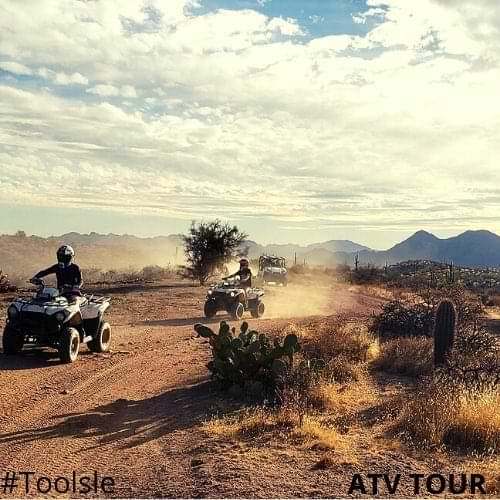 The word ATV stands for All-Terrain Vehicles. So, all the vehicles that are used in the rougher conditions fall under this category. Specifically, ATV is a small low-pressure tire vehicle that has three to six wheels, a seat straddled by the operator and for operating, there are handlebars connected to the steering.

There are various sizes of ATVs and all of them are not perfect for users of every age. Before choosing an ATV, one needs to check out the age recommendation imposed by the manufacturer. ATV can also carry passengers, but only one. Two types are depending on this, where the first one only comes with a seat for the driver and the second one comes with a seat behind the driver to carry one passenger.

UTV is a side by side passenger carrying or cargo-carrying off-road vehicle that has four or more wheels, which is controlled by the steering wheel and pedal. This type of vehicle comes with a non-straddle seat. The word UTV refers to Utility Terrain Vehicles or Utility Task Vehicle.

This is a type of ATV, but different from those as it can carry passengers by sitting side by side and that is why this vehicle is also known as side by side vehicles. It can carry two to four passengers. They are commonly used for agricultural purposes and are also commonly seen to be used for carrying educational institution goods. The speed of these vehicles ranges from 25 to 50 mph. Unlike ATVs, there is a roof designed on the UTVs.

Pros and cons of ATV & UTV

Before going to the pros and cons of ATV and UTC, you need to decide for which purpose, you are going to buy an off-road vehicle. If you need better control and a bit safer ride with more persons, UTV is the right option. However, if you want a small, single riding vehicle then look for an ATV.

ATV vs. UTV : Which is safer

Of course, UTV is a safer ride in comparison to UTV. There are some built-in features in a UTV that ensure safety.

Quad vs. ATV vs. Four wheeler

Both Quad and four-wheelers fall in the category of ATVs. However, they have some differences as well. Every four-wheeler is quads, but not all quads are four-wheelers. Again, every Quad is an ATV, but not every ATV is a quad. Let's make it a bit clearer now.

So I think, you are now clear about the differences between Quad and ATV. Now you need to decide which type of off-road vehicle you want.